Maria Romain earned her Bachelor of Science in Secondary Education at Wayne State University and Master in the Art of Teaching at Marygrove College, in Detroit, Michigan. She holds a Professional Teaching Certificate in Mathematics and Science (6-12) as well as a School Administrator (K—12) Certificate through the Michigan Department of Education. She also earned her Career Development Facilitator Certification through Oakland University.

She began her teaching career in Eastpointe Community Schools in 2002 where she taught high school mathematics and served as the advisor for the Diversity Club. She took a short-term sabbatical to start a family, and later returned to the classroom to teach mathematics for grades 6-12 and Career Planning for high school students at Parkway Christian School. In 2016, she left Parkway Christian to take a position at Macomb Community College as an Academic Training Specialist for the Michigan Coalition for Advanced Manufacturing (M-CAM). Although she enjoyed working in higher education, she deeply missed working in the K-12 educational community. In 2017, while continuing her work at Macomb Community College, she was hired as a Middle School Mathematics Instructor for the Girls in Engineering Academy Saturday program and Summer Camp. This position allowed her to continue her work in K-12 education.

In 2018, Ms. Romain left Macomb Community College and was hired as the K-12 Dean of Students for Macomb Christian Schools (MCS). It was then that she discovered her love for school administration. Unfortunately, MCS closed its doors permanently at the end of the 2018-19 school year. Ms. Romain was soon hired as an Academic Coach for ATS Educational Services, and she served in that capacity from 2019-21; however, her desire to serve as a school administrator led her to pursue other opportunities. 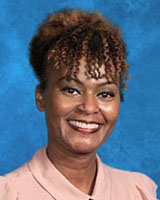 Employed Since
2019
Powered by Finalsite